Here’s what I sent to Michael Engelbrecht. It was in response to a conversation with producer Daniel Lanois about recording pianos. -Steve Tibbetts

Regarding Dan L and piano: Yes, I called up 3-4 “name” producers I knew to ask about microphone placement for a beautiful piano I had just purchased in 2004. Nothing they suggested worked very well. I called Willie Murphy, a local music legend who had produced Bonnie Raitt’s first album. Willie said in his gravely voice, “Tibbs, pull off the bottom plate of the piano, just over the pedals. Then find the best spot for the high end, in mono, with your first microphone. Do the same for the bottom end with your second microphone. Then pan the mics in stereo. Then ask Gordy Johnson to come over and tune the piano. Have your session ready to go when he arrives, with your tracks and the mixing board all set up, headphone levels, everything. If you’re mostly working in one or two keys, ask him to flatten the major or minor thirds by 5 cents. When he’s done, go to work. Right away. Start recording immediately. Tell Gordy you need to get right to work. The piano will sound perfect for about 3 hours.” Willie was right.

Some years before that Willie called me at my studio and said (same rough voice), “Tibbs, what’s a ‘ZZ Top’? Any relation to ‘ZZ Hill?'” I said, “Well Willie, ZZ Top happens to be one of the biggest bands in the world right now (this was in the mid-1990s). He said, “I got a call, and the ZZ guitarist is in town and wants to meet me and I don’t want to go alone, can you come with me to the concert?” (Ummm…yes.) He said, “Ok, I’ll be at your studio in 10 minutes.”

He picked me up in his orange Volvo, we drove to the St. Paul Civic Center, knocked on the stage door and it opened. The giant bearded security guard put his hand up and looked me up and down. Willie said, “He’s ok, he’s with me.” We stood by the stage and watched the show. Afterwards we were escorted to Billy Gibbons’ dressing room. Billy walked right over to Willie and said, “I always wanted to meet you, man.” Billy’s wardrobe road case had a recently discovered picture of Robert Johnson taped to the inner part of the door. I pointed to it and said, “Robert Johnson’s fingers look webbed ” Those were about the last words I was able to get into the conversation all night. Billy and Willie started their two-hour dialogue right there and then.

The three of us walked across the park from the St. Paul Civic Center and spent the night drinking at the St. Paul Hotel bar. I sat between Billy Gibbons and Willie. I didn’t say a word and tried to stay unmoving and invisible. I didn’t want to break the spell. I slowly, very slowly, drank a single gin and tonic for 2 hours while they talked about blues, Wittgenstein, Tarkovsky, Bukowski, Hendrix, Charlie Patton, Nabakov, and botany.

The bar closed about 2AM. The bar staff was standing at the bar in a perfect line, left to right, arms folded, half-smiles on their faces, elegant white shirts and black vests. They wanted to go home, but nobody wanted to be the one to ask the great Billy Gibbons to leave their establishment.

Finally the maître d’ hotel came over and and said gently, “We would like to invite you to take your conversation into the lobby.” Billy leaned back, stretched, and said, “I gotta go anyway.” Billy and Willy continued talking all the way to the front door of the St. Paul Hotel, having a spirited discussion about Vittorio De Sic, as I recall. At the door, Billy shook Willie’s hand for a full minute and said, “It was great to finally meet you, man.” Willie extracted his hand and we turned to go. Then Billy remembered me, looked kindly in my direction and said, “And it was good to meet you too.” 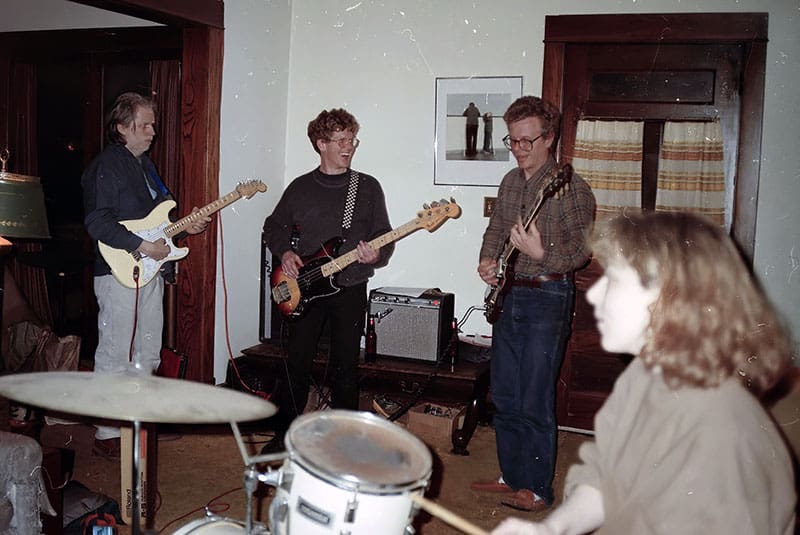